Covivio has signed two new pre-letting agreements with Gruppo Orsero, leader in Mediterranean Europe in the import and distribution of fruit and vegetables, and another leading Italian industrial company, for 4,500 m², pre-letting 100% of the office space in Building D of Symbiosis, three months before delivery.

The building of 18 000 m² has already been chosen as headquarters by important multinationals, such as Boehringer Ingelheim, one of the largest pharmaceutical companies in the world, LVMH Italia, leader in the luxury sector, some companies of the Mars Group – Royal Canin Italia and AniCura Italia.

“The total pre-letting of Building D is another demonstration of the trust that both Italian and international brands place in the Covivio’s projects and vision. It also demonstrates that the prime office market in Milan continues to perform well and maintains a very positive dynamic,” said Alexei Dal Pastro, CEO Italy of Covivio.

These further agreements, together with new negotiations at an advanced stage for the pre-letting of other buildings under development in the complex, confirm the attractiveness of the Symbiosis district. It’s a key component of the transformation of the entire area, and its role will also receive new impetus from the future urban regeneration of the Scalo di Porta Romana.

Since the establishment of Fastweb’s headquarters in 2018, Symbiosis has registered a growing interest until it has established itself as a destination for corporates of primary standing. Last May, Snam and Covivio signed a purchase and sale agreement for a new 19 000 m² building to be developed by 2024 within the Milanese business district.

As of today, 95% of the different Symbiosis buildings delivered or to be delivered by year end are let. In the meantime, the average rents on the site have increased by 30% since the start of the development of the Symbiosis area.

Designed by international architecture and interior design studio Antonio Citterio Patricia Viel (ACPV), Building D consists of two volumes covering a total of more than 18,000 m² and redefines the concept of the workplace by integrating new functions and diversifying the way future clients use the space. The offices have been designed as flexible spaces that allow easy access to digital solutions and technology and include teamwork areas and common areas to enhance employees’ creativity and productivity. Building D also houses a restaurant and a versatile auditorium of about 600 m². It will also be certified LEED Core & Shell score Platinum and aim to achieve WELL Core minimum score Bronze certification. It will also be one of the first buildings to obtain the WELL Health Safety rating, which guarantees occupants with the highest health and safety measures. 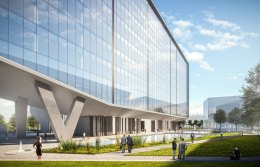 Activity at end-September: positive dynamics across all activities

GRESB 2021 ranking: Covivio strengthens its position as world leader in the Diversified Portfolio 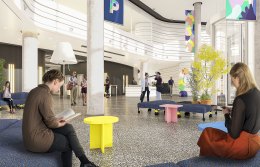 Samsung Electronics France chooses “So Pop” to install its teams

This site employs the cookies necessary for you to browse, as well as cookies that make it possible to perform statistical measurements of the site's audience and performance and Covivio's online advertising campaigns, and display personalized online advertising as a function of your browsing at the site.
By clicking on "Accept All" you give your consent to the installation of these various cookies. By clicking on "Refuse All", you refuse all cookies not necessary to your navigation on the site. You can also select "Customize" so that you can yourself manage the purposes of the cookies that you wish to activate.
Your denial of your consent for the installation of cookies is valid for a 6-month period.
CUSTOMIZE REFUSE ALLACCEPT ALL
Privacy & Cookies Policy

These cookies enable us to compile audience measurement and performance statistics by analyzing the volume and source of the traffic on our site.

These cookies also make it possible to analyze your behavior at our Site, specifically the pages consulted, and the forms completed, in order to measure and improve the performance of our Site and our online campaigns. If you do not accept these cookies, we will not be able to incorporate your browsing into our performance and audience measurement statistics.