A graduate of the IMHI MBA (ESSEC/CORNELL) programme, Sébastien de Courtivron, 42, began his career with the Disney/Eurodisney group, where he held the positions of Special Project Manager and Operations Director. In 2007, he joined the AccorHotels group, where he held several positions in different countries (France, Egypt, Brazil), including General Manager of Pullman Paris Bercy, and Operations Director for premium brands in Brazil. Since 2019, Sébastien de Courtivron was Regional Director Western Europe at Radisson Hotel Group, responsible for France, Belgium and Spain.

Alongside Tugdual Millet, CEO of Covivio Hotels, and the Covivio Hotels teams, Sébastien de Courtivron, who joined the group on 1 September 2022, will have the objective of managing and developing the operating hotels portfolio.
The group owns 325 hotels leased or operated by major European and international operators, valued at €6.7 billion at the end of June 2022.

“We are delighted to welcome Sébastien to the Covivio hotel team. His extensive international expertise with various European operators will increase our ability to grow and extract value from our portfolio.” says Tugdual Millet, CEO Covivio Hotels. 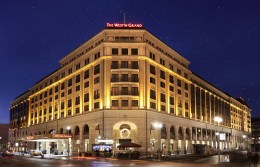