HENN Architects Munich was chosen to design the architectural project for Covivio’s future development in Leipzig, which involves the creation of two offices high-rise buildings with a total surface of around 30,000 m² and up to 17-storey. The redevelopment of this site, owned by Covivio and located close to Leipzig’s central station, is a strategic project for the municipality, which wants to make it the new gateway to the city centre.

Given the location and visibility of this site and in connection with the city of Leipzig, Covivio has chosen to launch an architectural and urban development competition. Ten national and international architectural firms participated in this competition. It was at the end of the second round that the jury, chaired by Professor Jörg Springer and composed of eight members, including Dorothee Dubrau, Mayor of Leipzig, selected by a large majority the project of HENN Architects: “The jury welcomes the urbanistic setting of two non-orthogonal, interlocking towers connected by a two-storey base. The result is an open, multi-perspective urban space, connected to the Westin Hotel as naturally as the shore situation along the Parthe”, the jury said.

The subject of the consultation was the urban redevelopment of the area, as well as the creation of a new office complex on the site of the current car park of the Westin Hotel. The latter, as well as the plot in question, have been owned by Covivio since 2016, which is thus enhancing the value of this site by mobilizing its various areas of expertise in Europe.

“Today, the convergence between our different real estate products is increasingly strong. Offices, hotels and residential real estate all share a common goal: to translate and embody new ways of working, travelling and living by leveraging synergies of uses,” said Marcus Bartenstein, co-CEO Germany of Covivio. “Our expertise spans the entire value chain of a real estate project: from design and technical development to asset and property management.”

“Creating open projects and lively neighbourhoods is Covivio’s ambition. To achieve this, we are capitalizing on our partnership approach and our 360° European expertise,” says Norman Weichhardt, Managing Director Development Germany at Covivio. “In close cooperation with the public authorities, our project is to create a new generation office complex with innovative working spaces, an open ground floor including catering, services and local shops, with local stakeholders in a short circuit logic”.

Prof. Jörg Springer (Springer Architekten, Berlin), chairman of the jury, comments: “Next to the Westin Hotel, the two towers linked by a common base create a perfectly coherent whole. Contemporary architecture and post-war style come together in a natural way”.

The City of Leipzig also welcomes the result of the competition. Dorothee Dubrau, Mayor and Councillor for Urban Development and Building of the City of Leipzig, thanks all participating architects for their commitment and the quality of their projects: “With this strong signal made up of two buildings, the architectural project is a concrete example of the future of Leipzig. The new space thus created is the perfect starting point for the future developments of this emblematic site.”

Covivio will now continue exchanges with the HENN agency in order to refine the project and initiate the preparatory work for the launch of the feasibility studies. 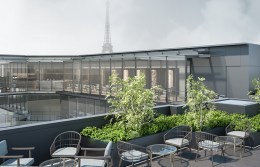 Solid performance 2020 thanks to a prime and diversified portfolio